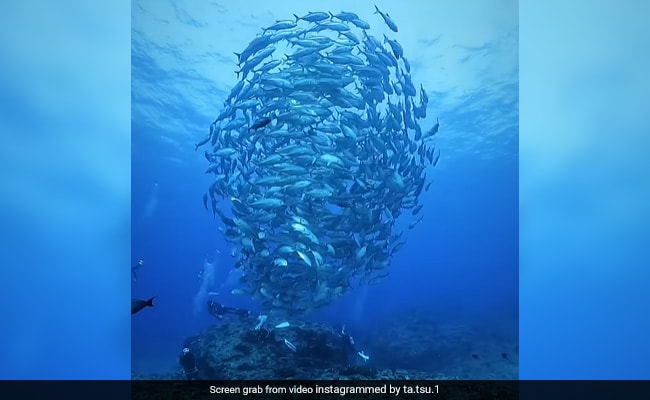 Picture shows thousands of small fish moving together in the same direction in a coordinated manner.

A video showing a group of fish coming together to form a tornado-like structure has gone viral on social media. The location where this massive undersea formation took place is not known but shows thousands of small fish moving together in the same direction in a coordinated manner – called schooling – and forming a vortex. The creatures living under the sea are known to possess distinct quality and mesmerise with their abilities and this video too is no different.

The video was originally posted on Instagram on July 7 by Japan-based Tatsuro, who describes himself as a marine photographer. His video has amassed over 3.6 million views and more than 2.4 lakh likes.

On his Instagram profile, Tatsuro has posted images from his vast and exquisite collection of exquisite sea photography.

The now-viral “fish tornado” video shows several small fries swimming collectively in a clockwise manner, much like wind gusts, to form the vortex.

The post’s comment section has been flooded with user’s comments who were perplexed by this unusual fish pattern.

“My God what a beautiful video. It’s wonderful. Thanks so much for this class of videos,” wrote a user. Another simply said, “Amazing.”

According to a website named eat.blue, the phenomenon closely resembles murmuration – when very large flocks of birds, fish, or insects move together and change directions simultaneously. The sound that the birds make as they move in tandem gives murmurations their name.

Robot Security Guard Throws Itself In Pond To Avoid Another Tedious...