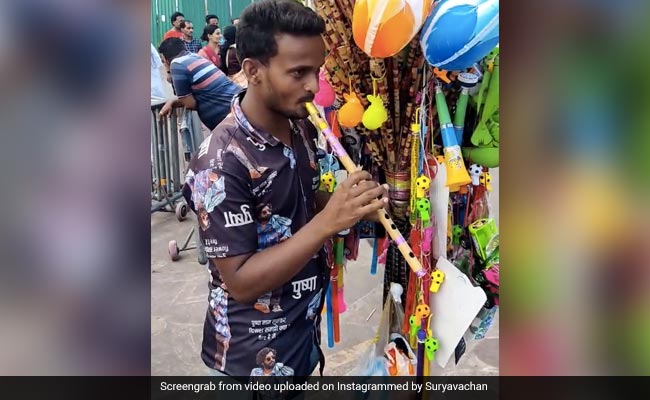 The man played the flute in front of the famous Jagannath temple.

“Kacha Badam” fever is still on. And a man’s flute performance on the viral song in Odisha proves that. The video of the performance has surfaced on Twitter where it has become a hit.

The jingle, composed and sung by peanut seller Bhuban Badyakar, became massively popular across the world in recent months. Badyakar used it to sell peanuts in return for old kitchenware and other broken objects.

“Kacha Badam” first went viral in November 2021, after one of Badyakar’s customers shared a video of him singing on social media. It was then picked up by celebrities like Badshah who released a song based on the jingle, and it became a hit.

Since its releases, several other vendors have used similar jingles to sell their products. In April, a lemonade seller went viral for creating a quirky tune to sell the refreshing drink. His funny antics and unique way of describing lemonade grabbed thousands of eyeballs.

In the jingle, the man said “Baaki nimbu baad vich paunga (I’ll use rest of the lemons later)”.

In the same month, a Pakistani artist released a song about keeping fast during the holy month of Ramzan, which was inspired by Badyakar’s jingle.

The song titled “Roza Rakhunga” by Yasir Soharwardi quickly became popular on Twitter and other platforms. It encouraged people to be compassionate while observing Roza (fast that Muslims keep from pre-dawn to sunset) during Ramzan. The Pakistani singer also made an appeal to the children to keep fast through his song.

‘People think I’m weird as I live in an old people’s...

Perfume Shop worker shares what your go-to scent says about you...