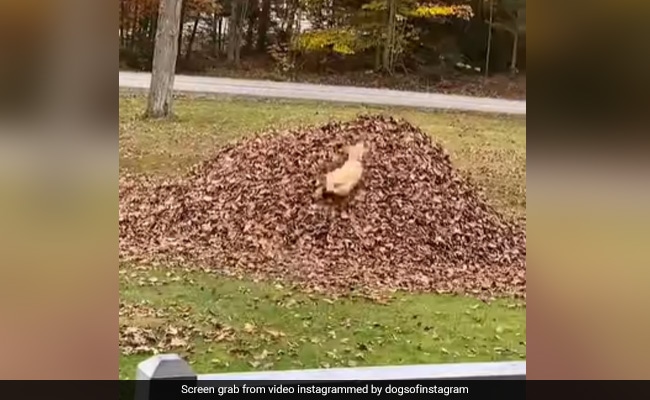 Picture shows the dog jumping right onto the pile of dry leaves stored outside the house.

Videos of cute animals performing adorable antics have widely shared on the internet, these videos are enough to make anyone’s day. One such video has surfaced on the internet shows a pet dog happily jumping into a heap of dry leaves. Shared by an official Instagram of Dogs of Instagram on Thursday, the caption reads, “Happy first day of fall from @dognamedstella, the official Queen of Leaf Jumping.” The video has been originally posted by the Instagram page of dog named Stella with its sibling Mable.

According to the post, the dog’s name is Stella and it can be seen racing from inside the home down stairs in the first part of the clip and jumping right onto the pile of dry leaves stored outside the house. After jumping into the pile of leaves Stella can be seen happily hiding itself from others.

Since being shared, the video has amassed over 6.4 lakh views and more than 33,000 likes. The post has also received numerous lovely remarks about Stella and its antics.

One user wrote, “Oh, goodness, this just makes me SMILE this morning.”

Another said, “I always love the jump ending tail wag! Can’t wait for Judith to have a jump this fall!”

Videos of adorable dogs are frequently shared on social media that are widely appreciated by the viewers. Recently, a video went viral on the internet showed a cute golden retriever curled up on a couch at home with a soft toy hanging on its paws. The dog then brings it closer to its mouth and kisses it. The video showed how much the dog liked playing with its toy.