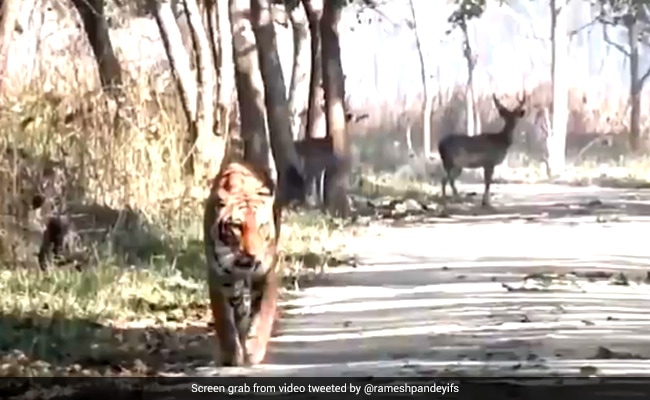 There are plenty of photos and videos of wildlife animals on the internet. People like watching these wild animals hunting on their preys but have you ever seen a wild animal ignoring its prey? If not, this is a must-read for you. A tiger can be seen strolling along a road in a video that has surfaced online, followed by two deer.

Tigers are truly economical in killing their preys. They don’t kill just for the sake of killing. #TeraiTales#wildlifepic.twitter.com/BTDFNDJJLB

The video was shared by an Indian Forest Service (IFS) officer, Ramesh Pandey, on Twitter on Wednesday.

While sharing the post, Mr Pandey wrote, “Tigers are truly economical in killing their prey. They don’t kill just for the sake of killing.”

The deer can be seen sneaking away from the scene while first staring at the tiger for a while as it continues walking along the roadside.

Since being shared, the post has accumulated over 1.4 lakh views and more than 2,800 likes. The post has so far received hundreds of retweets, and a significant number of people have left comments in the post’s comment box expressing their reactions and opinions. Several users have thanked the officer for sharing this video, while others have just adored the post.

“I have heard it said of humans, “They have no reason nor season. In nature, the webs are woven with great delicateness. We have set ourselves above it and are causing trouble for all. Thank you for sharing this,” wrote one user.

Another said, “All carnivores scavenge if needed. Some are established scavengers. Big cats also scavenge, especially during shortages and when weak or ill. We have labelled animals as per our imagination. Nature does not work that way. There is no mercy in nature.”

“Happy morning, Sir. Morning to all. Amazing to know. Only humans are unpredictable,” commented a third user.

Woman thought to be 121-years-old could be oldest in the world...

Alpaca who thinks she’s a dog wants nothing to do with...