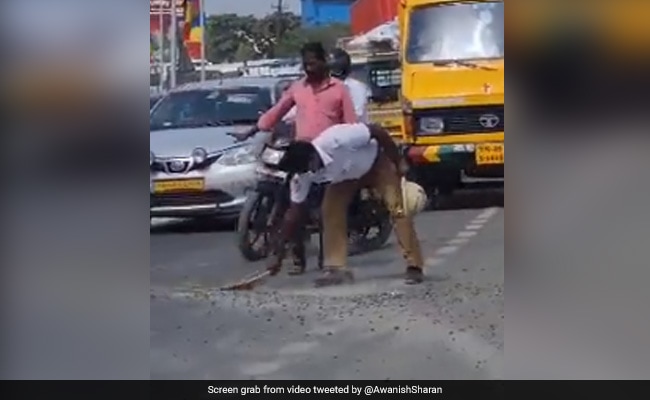 These unwanted particles can lead to tyre punctures.

A traffic policeman has a tough job at hand, to stand on road the entire day and control the vehicular movement efficiently. But there are a few cops who go beyond the regular work and contribute towards humanity.

A video is winning hearts on the internet where a traffic police is seen sweeping the road to remove small pebbles and rocks while the traffic signal is red. These unwanted particles could lead to tyre punctures.

The video has been shared on Twitter by Awanish Sharan, an IAS Officer of Chhattisgarh Cadre.

In the video, a man in a pink shirt can also be seen behind the cop directing motorists to drive a little slower when the red light turns green, as well as showing them the way and allowing the officer to remove all the stones away.

“Respect for You,” reads the caption.

People have thanked the policeman for taking such a step for the safety of commuters.

“Humanity is more than a duty, again proved,” a user wrote. While another said, “My salute and respect.”

In April, a photo of a traffic policeman in Kolkata went viral on social media. He was spotted offering tuition to a homeless child.

The officer was seen teaching the boy on the side of the road with a long stick in his hand. The picture was shared on the Facebook page of Kolkata Police.

Wedding guests ‘flying high as kites’ after one tier of cake...

Who In The World Is Carmen Sandiego?