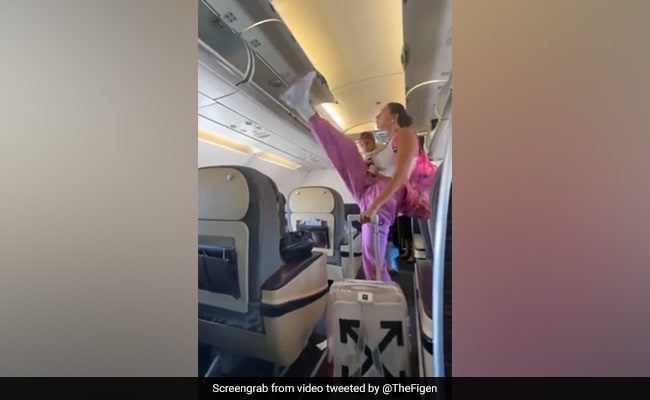 The best way to travel enjoy travelling is to carry minimum load or luggage. But some people are quite efficient in multi-tasking and able to manage their affairs on their own. A video of a woman travelling with a baby on flight is a classic example of this.

The now viral video shows the woman closing the overhead cabin in the plane with her foot. Yes, you read that right.

Watch the video for proof:

The video, shared by a Twitter user Figen on Wednesday, is captioned: “OMG so cool.”

It shows the woman getting ready to deboard the plane. While holding the baby in her one hand, she takes out the luggage from the aircraft’s cabin with another.

Even before you think that the woman is feeling helpless, or curse the fellow passengers and plane staff for not coming to her aid, she does the unthikable: Lifting her right leg like a gymnast to close the door of the overhead cabin with her foot.

Her little stunt became wildly popular on social media, with the video receiving 2.1 lakh views and over 6,861 likes.

Users have flooded the comment section with appreciation for the woman.

“She’s just showing off, no one ever closes the overhead bin after retrieving their luggage,” said another user.

“Show off,” a third user commented.

This is not the first time that a video of a woman performing some extraordinary stunt has gone viral.

In July 2020, a woman was recorded jumping into the swimming pool from a rooftop. The footage was shot during Fourth of July celebrations in the United States, according to the Daily Mail.

Strange-Looking Alligator Missing Top Half Of Its Jaw Spotted In US. See Pics

A Huge Japanese Spider Was Discovered In A Storage Container