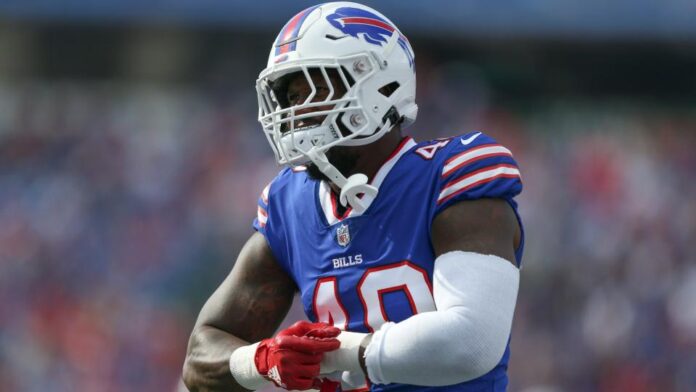 The Bills were already without one of their starting edge rushers, Greg Rousseau, entering their Thanksgiving Day game against the Lions.

Now, it appears that they have lost another one: Von Miller.

MORE: Why the Lions always play on Thanksgiving, explained

Miller, an 11-year veteran in his first season with the Bills, suffered a knee injury just before the two-minute warning in the first half against the Lions. The injury occurred when he he had his foot stepped on and bent his knee awkwardly while trying to get after Jared Goff.

Miller was able to walk off the field after his injury and made his way into the blue medical tent on the sideline. The 33-year-old spent a while in the tent, with RochesterFirst.com’s Thad Brown saying it was one of the longest examinations he had seen this year.

Von Miller remains in the medical blue tent. This is about as long an examination that Ive seen all year

ESPN’s Adam Schefter reports that Miller dodged an ACL injury, but suffered other injuries to the knee that will keep him out indefinitely.

Doctors are working to determine what Miller’s timetable is, but he could be out for the foreseeable future: Whether that’s a few weeks or done for the season remains to be seen.

Bills’ LB Von Miller did not tear his ACL, but there is other damage that doctors are reviewing to determine how much time he will miss and for now he is out indefinitely, per sources. He could be out a couple of weeks, it could be season ending; more info still being gathered.

After spending a handful of minutes in the tent, Miller came out and walked gingerly along the sidelines. He was then taken to the cart and driven back into the locker room with 1:52 left in the first half.

Shortly thereafter, the Bills announced that Miller would officially be out of the game as a result of the knee injury.

Bills OLB Von Miller was carted to the locker room with a knee injury.

He’s been ruled out for the rest of the game. pic.twitter.com/56K6iXZBLT

NFL Network’s Ian Rapoport originally reported that Miller’s injury is a knee sprain. The question is just how severe it will be or whether the injury is more serious than it appears.

Either way, it seems like Miller will miss time. It’s just a matter of how much.

There is no doubt Von Miller will miss time. The question is how much.

The Wild Card round of the playoffs is a more than a month and a half away. It’s 80 days until the Super Bowl. If the MRI confirms a sprain, his return could come in that window. Important tests coming. https://t.co/H0mvJA8Kcb

Bills coach Sean McDermott said after the game he had no update on Miller’s injury.

Miller logged one tackle and a quarterback hit before exiting the game. Buffalo is now down to three healthy defensive ends on the roster with Miller, Rousseau and A.J. Epenesa out of action against the Lions. They are Shaq Lawson, Boogie Basham and Mike Love.

‘My boyfriend wants to name our son after his cat –...