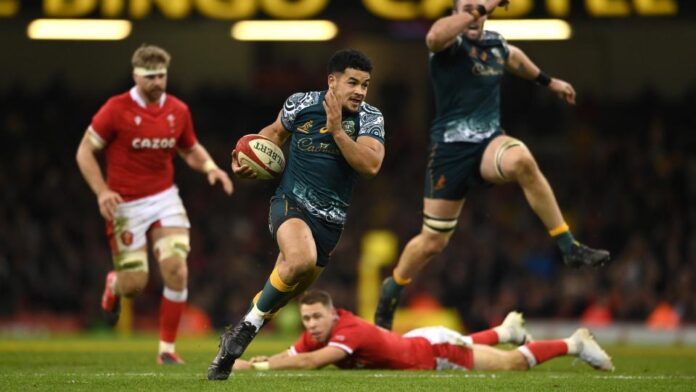 The penultimate game of the 2022 Autumn Nations Series takes place at the Principality Stadium in Cardiff between two teams who are in wretched runs of form.

End-of-year matches between Wales and Australia are typically must-see events regardless of recent results, but whoever loses this clash will be staring down the barrel of a make-or-break year of preparation in 2023 as the Rugby World Cup in France draws nearer.

Both sides’ autumn campaigns have seen them win just once each, and both have recorded losses to traditionally ‘smaller’ rugby nations for the first time in their history, with Wales being defeated at home by Georgia last time out and Italy beating the Wallabies in Florence the week prior.

Wales’ autumn series began against New Zealand, and whenever the All Blacks are in town, the test is sure to be tough. So it proved for Wayne Pivac’s side, who clawed back from 19-0 down with 16 unanswered points but were put to the sword in the second half as New Zealand ran out 55-23 winners, scoring eight tries in the process.

Wales did recover the following week against Argentina, who themselves had beaten England this autumn, winning 20-13 against the Pumas.

Australia’s autumn got off to a good, if nervy, start. Bernard Foley’s 11 points off the tee gave them a tight 16-15 victory over Scotland at Murrayfield, but that’s as good as this tour has got for the Wallabies.

Games being settled by a single point has become a running theme for Dave Rennie’s side: the subsequent matches saw them defeated 30-29 at the death by France and lose 28-27 to Italy for the first time in their history. The Wallabies did score a last-gasp try in Florence but were unable to add the crucial conversion that would have given them a one-point victory, rather than the Azzurri.

Off the back of two agonising losses, the Wallabies then headed for Dublin last weekend, playing out a dour, low-scoring match with the world’s top-ranked side, Ireland. Just three first-half points were scored, and despite the pair exchanging tries late in the second half through Ireland’s Bundee Aki and Jordan Petaia for the Wallabies, Ross Byrne’s late penalty ensured that Ireland edged the game, winning 13-10 in a contest that won’t make its way onto many highlight reels.

For Wales though, their defeat in last weekend’s clash with Georgia was even more crushing. Alongside Wales, Georgia are one of only seven countries to have rugby union as the national sport, and their 13-12 win in Cardiff only helped them move closer to the big time, further arguing their case to be included in an expanded version of Europe’s Six Nations Championship. Jac Morgan may have scored two tries in four first-half minutes for Wales, but from then on, the Lelos came into their own, with Sandro Todua’s try from a cross-field kick consigning the hosts to defeat as the Georgian players celebrated like they’d won the World Cup.

The @principalitysta roof will be closed this Saturday!

What time is Wales vs. Australia?

Wales host Australia at the Principality Stadium in Cardiff, Wales on Saturday, November 26. The game kicks off at 3.15 p.m. GMT.

How to watch Wales vs. Australia

UK: The Test match is available to stream via subscription service Amazon Prime Video in the UK.

Australia: All matches in the Autumn Nations Series, as well as this Test, will be streamed via Stan Sport in Australia.

New Zealand: Sky Sport is the place to catch the end-of-year international matches.

US: Subscription service FloSports has exclusive rights to the Autumn Nations Series with matches available to stream online.

The autumn series can prove to be a long, drawn-out one, particularly for a side badly out of form. Wales certainly fit that bill at the moment and have been forced into several replacements, calling up players with a range of experience. Full-back Leigh Halfpenny is back in the starting line-up, as is Alun Wyn Jones at lock. Gareth Anscombe, whose pinpoint kicking off the tee was so crucial against Argentina, is also back in the No. 10 jersey, with Rhys Priestland, another veteran, dropping to the bench.

Pivac has brought in several less experienced players in the hope of inspiring Wales to a rallying cry. Rio Dyer scored on his debut against the All Blacks and is back on the left wing to face the Wallabies. His inside centre is 20-year-old debutant Joe Hawkins, while Jac Morgan, arguably the only Welshman to end the Georgia game with his head held high, keeps his place on the blindside flank.

🤕 Hoops is out of this weekend’s Test against @WelshRugbyUnion. He’ll head back to home soil on Thursday.

This is Australia’s fifth and final game of their autumn series, and that packed fixture list has taken its toll on the Wallabies, with another half-dozen players returning home through injury after the Ireland game alone. This has seen a massive re-shuffle in their 23-man squad for this game, particularly in the backline, with Tom Wright switching from wing to full-back, Mark Nawaqanitawase swapping wings, and Jordan Petaia coming in on the vacant edge, having replaced the injured Hunter Paisami after just four minutes in Dublin.

Fly-half Ben Donaldson came on for his Wallabies debut against Italy, but this huge moment proved to be one to forget, as he missed the conversion following Caderyn Neville‘s late try that would have won Australia the game. He’ll be hoping for a better result to his second cap, which he’ll win from the first whistle as he starts at 10, and is partnered in the halves by Jake Gordon, who replaces the concussed Nic White for the Wallabies’ final game of 2022.

MORE: All hope not lost as ‘rocks not diamonds’ Wallabies close out 2022 tour

It’s not unfair to say that these two sides are on barren runs of results at the moment, and the mood of the bookmakers certainly reflects this. It’s a close one to call, as ever between Wales and Australia, but Sky Bet, Ladbrokes and BetMGM all appear to be backing the hosts, just. They’re at just 4/6 and 4/7 respectively with Sky Bet and BetMGM, although the former has Australia just behind at 5/4.

Alpaca who thinks she’s a dog wants nothing to do with...

Toby Carvery and Harvester launch 50% off deal for this week...

Instead Of Making Cakes Look Like Objects, People Used To Bake...