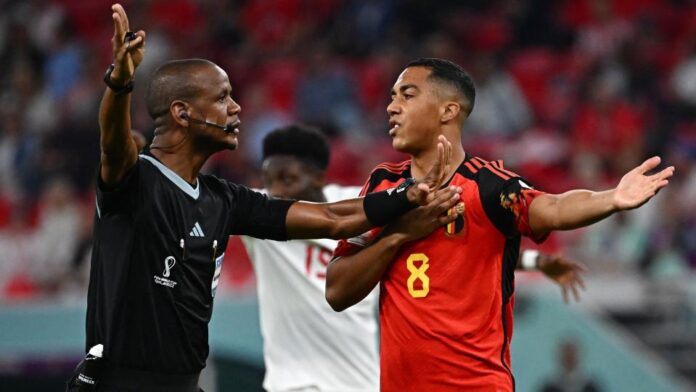 Canada’s first World Cup match since Mexico 1986 did not go to plan, as they lost 1-0 to Belgium in their Group F opener in Al Rayyan.

The Canucks’ luck was out again before the break as Tajon Buchanan was fouled inside the penalty area, by Jan Vertonghen, but referee Janny Sikazwe opted against awarding another spot kick.,

John Herdman’s side were then hit by a double blow just before the interval, as Michy Batshuayi slotted Belgium into a 1-0 lead, with the Red Devils able to hold on for victory in the second period.

Should Canada have had a penalty?

The Canada players were incensed by Sikazwe’s call to deny them a penalty and not consult the VAR pitch side monitor on 14 minutes.

Sikawze rejected their appeals, due to an offside in the build up, but his decision was confirmed as incorrect as the final pass before the foul was played by Belgian star Eden Hazard.

Offside cannot be given in that situation, as the pass was played by an opposition player, and Sikazwe’s decision continues the theme of refereeing and VAR inconsistency in Qatar.

*Video available in US

“It was a missed call by both the referee and VAR. Canada should’ve had another penalty.”@stuholden breaks down why Canada should have had a second penalty ⬇️ pic.twitter.com/nuwikeItcd

Who was referee in Canada vs Belgium?

Zambian official Sikazwe made his World Cup debut in Russia four years ago, with two group stage appearances, one of which involved Belgium.

However, his most infamous moment came in the 2021 Africa Cup of Nations tie between Mali and Tunisia, where he became a social media sensation for incorrectly blowing the final whistle too early – twice!

The 42-year-old initially ended the 90 minute game after just 85 minutes before blowing up again seconds before the true end.

Canada had the official for the first match against Belgium.

🇿🇲Janny Sikazwe, the referee that stopped the AFCON match in the 85th minute, which later resumed but didn’t have any stoppage time.

In another bizarre twist, he attempted to restart the game – to play three minutes of added time – 25 minutes later, but the Tunisia team refused.

Frustrated Canada fans have flooded social media to criticise Sikazwe’s decision as their World Cup return began with a defeat.

Potential penalty missed on the last play, as it appears as though it was actually a Belgian back pass.

No matter though, as Junior Hoilett goes back up the other end and nearly guides one in at the far post.

The voice of reason from someone who really knows 🇨🇦 vs 🇧🇪 #CanMNT https://t.co/A8diLLd2Me

Gnosis Safe releases first in a suite of tools for DAO...

Passengers spooked as flight intercom is taken over by unexplained groaning...

Woman furious after £74 tattoo disaster as people say she should...