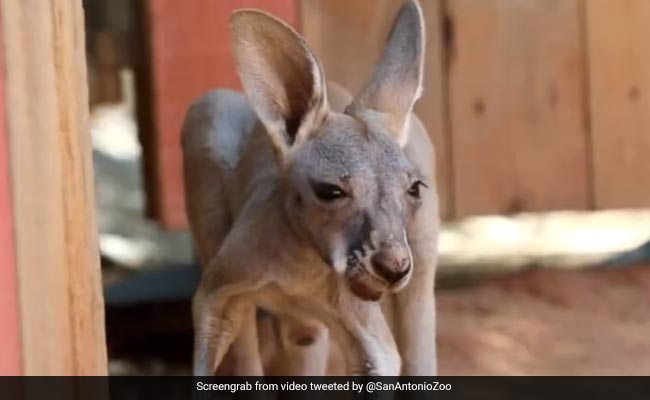 The video of the baby kangaroo has received more than 1,000 views.

A baby kangaroo pulled a disgusted face in his enclosure at the San Antonio Zoo in Texas, after getting a bit of dirt in its mouth.

The video has been posted on Twitter by the San Antonio Zoological Society and made available by Storyful. It shows the kangaroo poking out his tongue while chewing something in its pen.

“Pyrite’s joey got some dirt in his mouth and had quite the reaction!” the zoo said in a Twitter post accompanying the video.

Pyrite’s joey got some dirt in his mouth and had quite the reaction 😂😂😂 pic.twitter.com/Jy0uNsGaCu

It was posted on Thursday and since then has received more than 1,000 views. Twitter users posted creative comments to describe the condition of the baby kangaroo.

“Gee how did I get this stuff in my mouth,” one user said. “Give him a drink,” said another.

Last month, video of a brawl between a man and a kangaroo in Australia went viral on social media. The rogue kangaroo chased the terrified man and attacked him, it showed.

The man was seen sprinting away from the irate kangaroo before stumbling and hitting the ground.

Daily Star identified the man as Cliff Des. He manages to fend the Kangaroo off for a couple of seconds with a tree branch, however, moments later, the marsupial pushes the man to the ground and begins the assault.

In the video, the kangaroo is then seen leaping forward before moving back to land several punches on the man. A number of blows are exchanged as Mr Des moves in towards the beast. He attempts to grab the animal, resulting in a WWE-like action from the kangaroo as he throws both of them to the ground.

Luckily, Mr Des manages to successfully pin the kangaroo to the ground.

Mum told to ‘throw kid away’ after five-year-old draws on her...

‘I’m a mum – stop ice lollies from dripping down your...