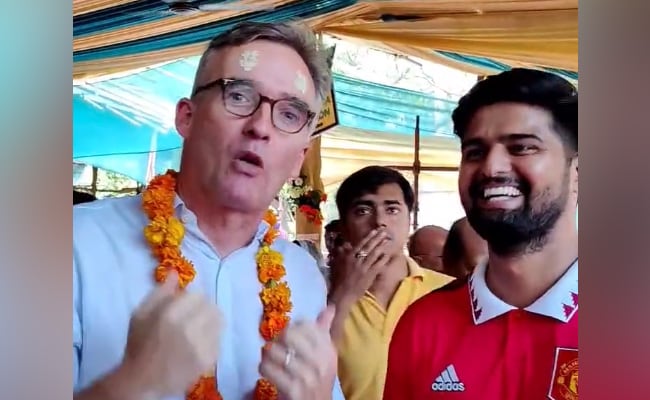 British humour was on display at Delhi’s Iskcon temple on Friday in a hilarious conversation between UK High Commissioner to India Alex Ellis and a Manchester United fan who was praying for divine intervention for the struggling soccer team.

Mr Ellis posted a video of his repartee with the fan, who was wearing a ManUtd t-shirt. “Met a ManUtd fan at the ISKCON (Delhi) temple searching (understandably) for divine intervention,” he tweeted.

This unidentified young man told the British High Commissioner that he had come to pray hoping that Lord Krishna will help Manchester United win matches. To this, Mr Ellis replied, “You would need more (help) than that.”

In the video, the British High Commissioner is heard saying that it is important to have faith in a culture. “To believe that Manchester United are going to win requires an act of faith,” Mr Ellis joked as the Manchester United laughed sportingly.

After a poor season under Ralf Rangnick last year, ManUtd fans were hoping for a new tide this season under new manager Erik ten Hag.

But two successive defeats against Brighton & Hove Albion and Brentford have left the club at the bottom of the English Premier League (EPL) table.

After a poor performance in the past few seasons, one of the greatest teams in the history of EPL is now a subject of strong criticism and savage memes.

Only a few days back, Tesla CEO Elon Musk tweeted that he was planning to buy ManU but later said he was only joking.

Manchester United is one of the most popular teams in the world with a record number of domestic and European trophy wins. But after the exit of Sir Alex Ferguson in 2013, the club struggled to win Premier League titles.

Viral Video: Ducklings Sleep Over A Puppy And It Is Not Disturbed At All

People Perform Garba Inside A Swimming Pool In Rajasthan, Internet Asks “Why?”