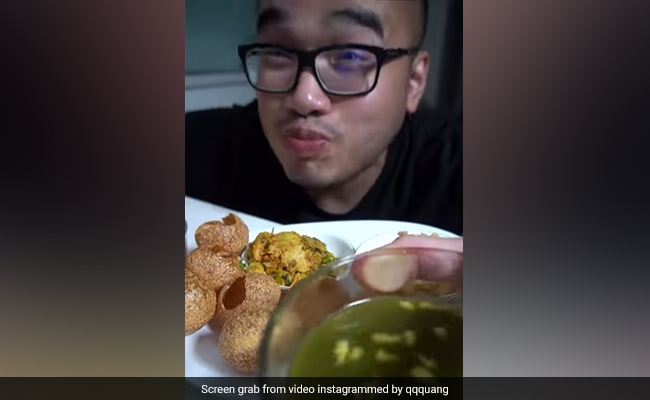 Maharashtra’s Pani Puri, Madhya Pradesh’s Fulki and Odisha’s GupChup, better known as Gol Gappa‘s in north India are one of the most famous street snacks in the country. The snack is loved by all age groups in the country. However, when a foreigner tries this spicy traditional delicacy, it often turns into a hilarious experience. Those reaction videos always make us curious and think about how other people like our food. The best part is that the internet is full of such videos. Recently, a Vietnamese food blogger Quang Tran shared his experience of having Pani Puri for the first time. Quang Tran often uploads videos when trying out new dishes and shares them with his audience.

In this recent video, we can see the food blogger sitting with a plate of Pani Puri, mint water and tamarind spiced water. As he tries out the Pani Puri, he says,  “One of the most amazing things you guys could ever pop in your mouth.” Further in the video, Mr Tran fills the Pani Puri with potato fillings and mint water. He then tries it with Tamarind spiced water. After relishing it for a few seconds, he says it tastes, “heavenly.”

The video has amassed more than 3 lakh views. After watching the video, the social media users said that they are “craving for some Pani Puri now.” A user commented, “Tamarind sauce water supremacy.” Another user wrote, “I tried this I thought it was called gol gappa,” “You almost choked on the first one please don’t gulp it just like that,” the third commented.

Many people also asked the name of the restaurants where they could try Pani Puri.

Watch: This Cow-Dog Pair Has A Beautiful Reaction To Soothing Flute Music

Watch: ATM In US Displays Bank Balances Of Customers And Their Photos On A Leaderboard

Journalist Messages The Mum Of A Man Who Sent Her Abuse