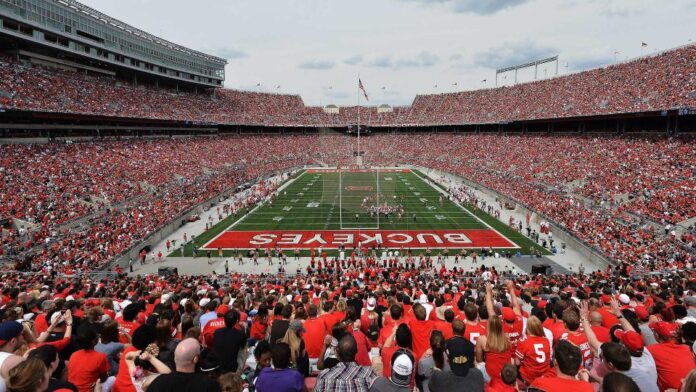 For the second year in a row, “College GameDay” will finish off the regular season with a trip to the Midwest for a meeting between Michigan and Ohio State in “The Game.”

Much like last year, the second-ranked Buckeyes and third-ranked Wolverines are playing for berths in the Big Ten championship and College Football Playoff. Michigan stunned Ryan Day and Co. in Ann Arbor in 2021, upending the Buckeyes 42-27 for the team’s first win in the rivalry since 2011.

Ohio State has had all year to stew about that loss, and enters the game with a rare combination: an undefeated record and a chip on its shoulder. Michigan has an 11-0 record as well, and much the same mentality. The Wolverines must prove they can sustain success against the Buckeyes, against whom they have not won consecutive games since 1999-2000. They also haven’t won in Columbus since the turn of the millennium.

This will be the teams’ first undefeated meeting since 2006, a game Ohio State won 42-39 in Columbus. Will Saturday’s game provide similar fireworks? A different result? Or will these teams write a completely new entry into the history of “The Game”?

Only one way to find out. Until then, here’s what you need to know about this week’s “College GameDay” appearance.

Where is ‘College GameDay’ location for Week 12?

This will be Ohio State’s 55th appearance on “College GameDay,” which is making its 22nd visit to Columbus. This is the second time this year the Buckeyes will play host following a top-10 showdown with Notre Dame to open the season.

The Buckeyes are still the winningest team in “GameDay” history, compiling a 38-16 record in their previous 54 appearances (including 16-5 as the host team). Ohio State is 1-0 this year after beating the Fighting Irish.

Michigan will make its 35th appearance on “GameDay,” and the first since “The Game” last year in Ann Arbor. The Wolverines are 17-17 all time when among the featured teams, though that includes a paltry 7-13 road record. Michigan is also only 2-5 against Ohio State on “GameDay,” and 0-4 when playing in Columbus.

MORE: Will Michigan-Ohio State rematches in future be good for The Game?

The “GameDay” crew will preview “The Game” plus all the other Week 13 games live from outside Ohio Stadium in Columbus, Ohio. The game kicks will kick off at noon ET on Fox.

Conference championship weekend has more than a few captivating choices for “College GameDay,” but the most likely is a potential top-four meeting between No. 1 Georgia and LSU, which could be listed as among the four teams in after the Ohio State-Michigan game. The winner there almost certainly will make the College Football Playoff.

Who is the guest picker on ‘College GameDay’ for Week 13?

“College GameDay” hasn’t yet announced its guest picker for Week 13.

Homebase is selling a hot tub for half price – and...

‘My sister and I are both pregnant with girls & we’ve...