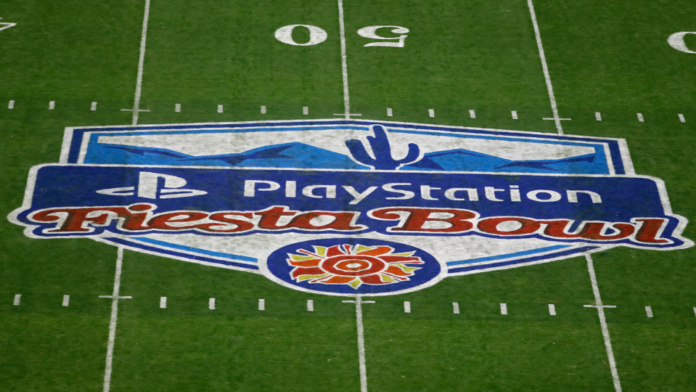 The Fiesta Bowl returns for a 52nd year, but for the third time, it will also serve as a College Football Playoff semifinal. That means more than just a huge 46-inch trophy will be on the line in this New Year’s Six bowl in the desert.

Both of the first two Fiesta Bowl playoff matchups were battles between Clemson and Ohio State. This year’s participants won’t be set until the playoff field is selected on Sunday, Dec. 4, but the matchup is poised to be more unique this time around.

The Fiesta Bowl has produced some classics over the years, including a 2007 showdown between Boise State and Oklahoma State and a 52-point explosion by Blake Bortles and UCF in 2014.

With a spot in the National Championship Game on the line this time, there will be a chance for some fireworks on New Year’s Eve.

Here’s everything you need to know about the 2022 Fiesta Bowl, including teams, date, and betting odds.

The Fiesta Bowl will feature two of the four College Football Playoff teams, as chosen by the selection committee.

While it is not known whether the Fiesta Bowl will host the No. 1 vs. No. 4 matchup or the No. 2 vs. No. 3 matchup, the committee chooses based on which location gives more of an advantage to the highest seed. If Georgia remains in the No. 1 slot, the Bulldogs would play in the Peach Bowl while the No. 2 and No. 3 seeds would play in the Fiesta Bowl.

This section will be updated when the College Football Playoff matchups are revealed.

This section will be updated when opening odds become available for the Fiesta Bowl.

Where is the Fiesta Bowl being played in 2022?

The Fiesta Bowl will kick off from State Farm Stadium in Glendale, Ariz.

State Farm Stadium is home of the NFL’s Arizona Cardinals and has hosted the Fiesta Bowl since 2007.

Gru From Despicable Me Saying ‘Gorl’ Is Now A Meme