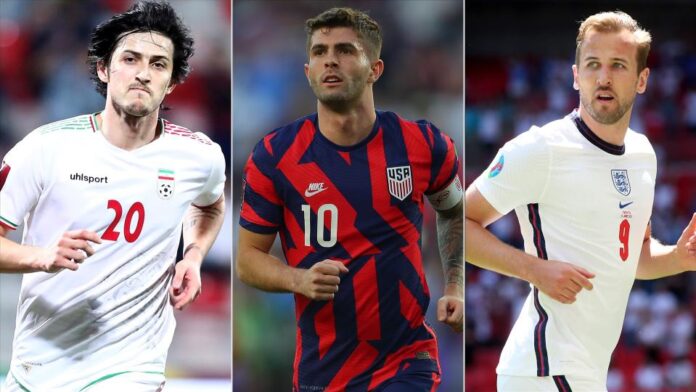 England can become the first team from Group B to clinch a spot in the Round of 16 with a victory on Friday against the USA.

The Three Lions already have three points from their decisive 6-2 win over Iran in their opening group match and another victory would put them out of reach of both the USA and Wales heading into the third and final matchday.

Iran recovered from that 6-2 loss and beat 10-man Wales 2-0 with two stoppage-time strikes. That triumph now gives them a chance to qualify on the final day with a victory over the USA (a tie could also work depending on the result from the Wales-England match).

The Americans, of course, are still very much in the running, and regardless of the result against England, they will also go into the final match needing to beat Iran in order to have a chance to advance to the knockouts.

The four teams are playing a round-robin format with each nation facing the other three. Group standings are based on points from those three group-stage matches — three points for a win, one for a draw, none for a loss.

The top two teams from each group based on total points advance to the single-game knockouts. If teams are tied on points, goal difference is the first tiebreaker followed by goals scored. If teams are also tied in those categories another set of tiebreakers is applied.

Having reached the semifinals of the 2018 World Cup and then the final of Euro 2020 — only to lose painfully on penalties to Italy — England will be determined to go one better in Qatar and finally win their first major trophy since 1966.

Gareth Southgate has some very exciting young players at his disposal — not least the likes of Dortmund’s Jude Bellingham and Arsenal’s Bukayo Saka — combined with a handful of experienced stars, who now possess significant tournament experience. It’s now a question of whether they can get over the line.

Southgate will hope that Manchester United defender Harry Maguire can recapture his best form ahead of the tournament after his struggles at club level, while there will inevitably again be much scrutiny on Harry Kane, who will likely have the chance to become his country’s leading all-time goalscorer.

The U.S. will be joining the party at World Cup 2022, barely making it through regional qualifying on goal difference past Costa Rica. This will be the 11th time that the U.S. men’s national team (USMNT) has featured on the global stage, with the best result coming via a semifinal run at the inaugural tournament in 1930.

Without question, Gregg Berhalter’s side has enough young talent to have a chance at getting out of the group, and should excite supporters on the way, as they plot a potential deep World Cup run.

Chelsea’s Christian Pulisic will be expected to play the main role, while Borussia Dortmund’s Gio Reyna will provide a creative spark in the attack. The U.S. will be a real threat going forward for teams to worry about, given their 21 goals scored in qualification.

Iran will appear at a third straight World Cup finals as the No. 1-ranked national team from the Asian region, capable of making a mark.

They qualified for the 2022 showpiece in emphatic style, winning eight and only losing one of their final qualification-round fixtures. That was enough for them to finish top of their group, as they edged out South Korea, who also qualified as runners-up.

Porto forward Mehdi Taremi, Feyenoord creator Alireza Jahanbakhsh and Bayer Leverkusen threat Sardar Azmoun make Iran a strong attacking unit, but their coaching situation has been the subject of most focus in the build-up. Dragan Skocic led them through qualification but was fired and then reportedly re-hired in quick succession in July, before eventually being replaced by ex-Manchester United tactician, Portuguese Carlos Querioz. He is now in his second spell in charge, having taken them to the 2014 and 2018 World Cups.

Events away from the pitch meant that Wales had to wait longer than most to book their place in Qatar, with the outcome of the final European playoff spot delayed until June. Wales eventually defeated Ukraine on June 5 to secure the final UEFA playoff berth and a first appearance on the biggest stage since 1958.

Wales reached the quarterfinals in that 1958 appearance, their only World Cup finals in history.

Robert Page’s side have punched well above their weight in recent years, even managing to get to the semifinals of Euro 2016 before losing to eventual champions Portugal. Gareth Bale and on-loan Fulham man Daniel James will be crucial to their World Cup hopes.

Here are the odds for each team to win and qualify from the group, with odds provided by Sports Interaction (correct as of Nov. 2022).

Minus odds is what must be wagered to win $100 on that specific bet, while plus odds represent the winnings from a successful $100 wager.

The first-place and second-place finishers in Group B will move on to the Round of 16 and will face off against the two teams to advance from Group A on Saturday, Dec. 3 and Sunday, Dec. 4.

The official FIFA 2022 World Cup match schedule outlines the following knockout pairings for the Round of 16 through to the final:

World Cup Round of 16