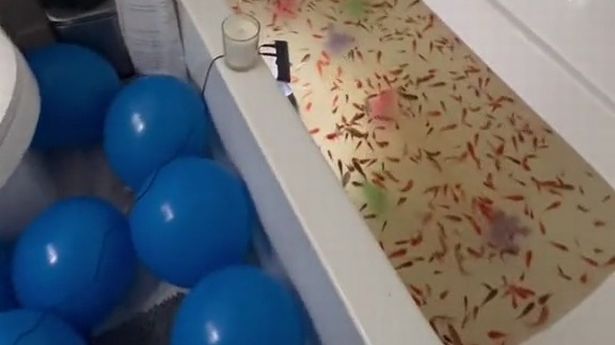 The couple was gobsmacked about the friend’s prank (

A newly married couple have been left gobsmacked after their friends played a seriously cunning prank on them – as they filled the newlyweds’ house with unusual items while they jetted off for a romantic honeymoon getaway.

Taking hoaxes to a new extreme, their friends covered the inside of home with an abundance of objects – including saran wrap, a hamster ball, a room full of balloons and lots of plastic cups – but most surprisingly, an makeshift ‘indoor aquarium’. Sharing the video to popular video-streaming service TikTok, the jaw-dropping footage has been witnessed by more than 17.3 million viewers to date.

Annalise Garcia and her husband were understandably gobsmacked when they returned home after getting recently engaged.

The unbelievable sight meant that Annalise quickly got out her phone to document the mess.

Sharing her shock, she explained as she filmed footage: “Come back from our honeymoon to quite the surprise.

“We came back from our honeymoon to this – everything saran wrapped, an empty mouse ball, which is terrifying.

“Cups going all the way up the stairs,” she added. “We open [door] up to the most balloons, but that isn’t even the worst part.

Their furniture was saran wrapped
(

And goldfish were in the tub
(

“They turned our bathtub into an aquarium,” she exclaimed.

The clip then turns to footage of said bathtub, which is full to the brim of goldfish swimming in water.

Thankfully Annalise explained in a recent update video that she and her partner are currently searching for a “forever home” for the fish, adding that they have built a temporary pond.

The wife explained: “Thankfully the pranksters weren’t heartless and they care about wildlife and they gave us concentrated biological booster – and we have goldfish flakes, which we’re going to use.”

While the couple most likely saw the incident as a harmless joke, it was no laughing matter for some TikTokers.

Users on the social media app quickly claimed that the couple’s pals took things step too far – especially with the fish.

One person on TikTok said: “If they came back and cleaned everything up themselves, then yes, it would be funny. But if they just left it….yeah we’d no longer be friends.”

A second argued: “The balloons and cups fine – Saran Wrap okay – but the gerbil and fish … that’s too far ….”

A different user commented: “They are NOT your friends.”

Woman puzzled by dog’s odd obsession – and canine gets grumpy...

Nostradamus predictions for 2023 – from ‘great war’ to revolt against...

Man Sets Up Romantic Dinner Date Next To Unsuspecting Woman On...