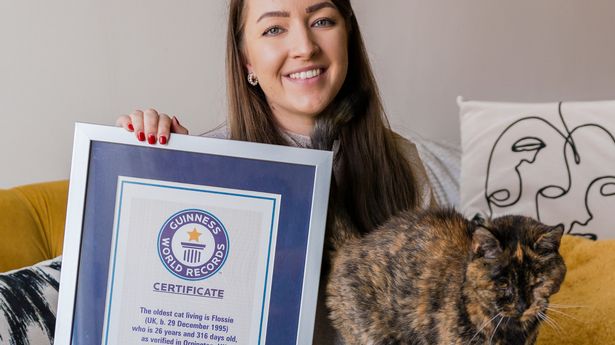 Flossie was born in 1995, making her almost 27-years-old – the record-breaking cat was rehomed after her original owner died and is living a very happy life

It appears that some cats really do have nine lives, as the Guinness World Records have announced that Flossie the moggie is officially the oldest cat in the world.

Flossie was then taken in by the woman’s sister, who had her for 14 more happy years, until she too passed away.

Flossie then lived with the woman’s son, until his situation led him to make the difficult decision to relinquish the family cat to volunteers at Cats Protection.

…which is a tiring title to have!
(

Now, the beloved moggie has found a loving new home with Vicki Green, of Orpington, and her latest owner couldn’t have known that she was giving sanctuary to a record breaker.

Vicki, who has had previous experience of caring for senior felines said Flossie is an ‘amazing cat’ who has settled in well, and sleeps ‘snuggled on the bed’ with her.

Craig Glenday, Editor in Chief at Guinness World Records said: “We were so excited to hear about the lovely Flossie and celebrate her long life – it’s not every day you come across a cat who has been around since the mid-nineties.

“This is the human equivalent of over 120 years old, which would put her on par with Jeanne Calment, the French supercentenarian who lived to 122 years 164 days and holds the record for the oldest person ever.

“We’re happy to see Flossie settled and enjoying all the home comforts she deserves in her later life. A huge congratulations to Flossie, a highly deserving record-breaker.”

Vicki said that she never imagined that she’d share her home with a Guinness World Records title holder.

She said: “I knew from the start that Flossie was a special cat, but I didn’t imagine I’d share my home with a Guinness World Records title holder. She’s so affectionate and playful, especially sweet when you remember how old she is.

“She’s deaf and with failing eyesight but none of that seems to bother her. She’s completely with it, loves affection and has a very good appetite.

“She never turns her nose up at the chance of a good meal, except when she’s snuggled on her favourite yellow blanket.”

The news comes as Gino the dog has been named the oldest at 22 years old.

Do you have an older pet? Let us know in the comments.

Weird ‘Half Human, Half Animal’ Creature ‘Spotted In Argentina’

Woman rages at ‘bad human being’ who tried to shame her...