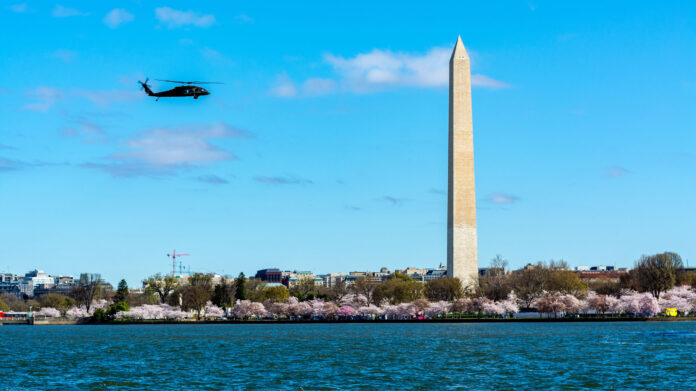 The soundtrack of life in the nation’s capital isn’t just go-go beats(Opens in a new window) and people asking “so what do you do?” It’s also helicopters—usually government-operated, which are about the only aircraft allowed to fly in the controlled airspace above Washington, D.C.

But unlike the airliners flying prescribed courses above the Potomac River to and from National Airport, most of these federal helicopters don’t broadcast their coordinates via the federally mandated, public Automatic Dependent Surveillance-Broadcast (ADS-B)(Opens in a new window) system and so remain invisible on flight-tracking apps and sites.

In early 2020(Opens in a new window), a freelance audio/video engineer named Andrew Logan decided to do something about that by launching a crowdsourced @HelicoptersofDC(Opens in a new window) chopper-spotting effort on Twitter. Three years later, Logan came to a security conference in D.C. to explain how it’s working out.

“Our app started as a humble ADS-B bot,” Logan told attendees of ShmooCon(Opens in a new window) on Saturday afternoon. But although federal regulations(Opens in a new window) require keeping ADS-B active unless an aircraft flies “a sensitive government mission for national defense, homeland security, intelligence or law enforcement purposes,” government operators seem to read that exception quite generously.

(This also applies to fixed-wing military aircraft; residents may get no more advance notice of an Arlington National Cemetery funeral flyover(Opens in a new window) than a sudden crescendo of jet noise seconds before four fighter jets streak overhead in a missing-man formation.)

That Twitter account invites people to reply(Opens in a new window) with photos of overhead helicopters, tagged with their location, then hands out points for completed spotting reports.

This Patreon-backed(Opens in a new window) #CopterSpotter venture in gamified OSINT (open-source intelligence) gathered more than 7,000 reports in 2022(Opens in a new window), with the top five participants having earned more than 2,000 points each since 2020. “Some people have gotten hard to catch at this point,” Logan said while showing an image of that leaderboard.

He also provides a web form(Opens in a new window) for people to upload geotagged photos—which, unlike Twitter, allows backdated submissions and does not require a name. Logan offered a hint to his audience: “You can submit anonymously, government contractors.”

A machine-vision model(Opens in a new window) trained on 17,000 images then processes these submitted photos to identify each aircraft by such criteria as its number of rotors and type of landing gear.

“Now any photo sent to us gets a type, the probable operator of that type in the D.C. area, and the confidence we have in that assessment,” Logan said. In a test of a thousand submissions, he continued, “it was effective at finding the correct type 77% of the time.”

More recently, Logan addressed the problem that, as he put it, “images are not very useful at night,” by adding a workaround to record air-traffic control conversations with National Airport’s tower: “We deployed a Raspberry Pi on a balcony over DCA.”

Logan relies on Patreon funding(Opens in a new window) and reported no interference or objections from federal authorities in his talk. Instead, he talked about “the elephant in the room”—Twitter owner Elon Musk, who in December began taking great offense to accounts using ADS-B data to track his private jet and had Twitter rush out a rule banning the real-time sharing of location data.

Musk’s effort to quash that publicity not only took out the @ElonJet account but briefly suspended(Opens in a new window) @HelicoptersofDC as well.

Logan has since responded by setting up a HelicoptersofDC account(Opens in a new window) on the Telegram messaging service. He said he picked that because it allows geotagging, although he also followed @ElonJet operator Jack Sweeney by setting up a Mastodon account(Opens in a new window). His Twitter presence remains active, but he didn’t sound optimistic about its future Saturday.

Said Logan: “We don’t have a lot of faith in this platform in the long term.”

Parents’ top tips to help excitable children get to sleep on...