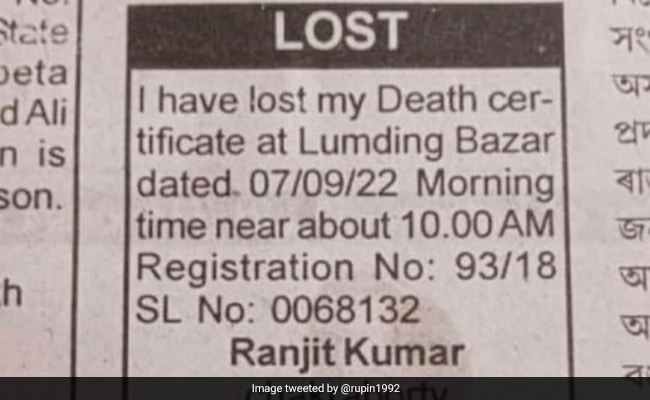 Internet users jokingly asked where they should reach out once they found the lost item.

The internet is filled with endless bizarre content from across the world. Be it innovative cooking hacks, adorable animal videos or unusual wedding invitations, they keep us hooked to our screens all day long. Now, a man’s newspaper advertisement about his lost death certificate has left the internet in splits.

Taking to Twitter on Sunday, Indian Police Service (IPS) officer Rupin Sharma shared a photo of the print advertisement, in which a man claimed that he lost his own death certificate – a document which is only made when a person dies. “I have lost my death certificate at Lumding Bazar (in Assam) dated 07/09/22,” the advertisement read. It also mentioned the registration and the serial number of the lost certificate.

It happens only in #India😂😂😂 pic.twitter.com/eJnAtV64aX

“It happens only in India,” Mr Sharma hilariously captioned the post.

Since being shared, the image of the advertisement has taken the internet by storm. Netizens wondered if the man was asking for help from heaven. Some users even jokingly asked where they should reach out once they found the lost item.

“If found where the certificate has to be delivered Heaven or Hell?” wrote one user. “This is ‘Ad-bhoot’,” commented another.

Meanwhile, speaking of bizarre content on the internet, earlier this year a pharmacist’s unusual wedding invitation caught the attention of netizens. The wedding invite looked like the back side of a pack of tablets. However, contrary to the usual warning and ingredient list, it contained the details of the wedding time, date and the bride and groom’s names.

The image of the wedding invite was shared by RPG Chairman Harsh Goenka on Twitter. “People have become so innovative these days,” he wrote in the caption of the post.

Grocery Shopping Hacks, Some to Save You Cash

Byers’ House From Stranger Things is Up For Sale

Bride gets wedding manicure but it’s so bad people said she...

Woman Trades Hairpin For Cabin Through Series Of Crafty Swaps