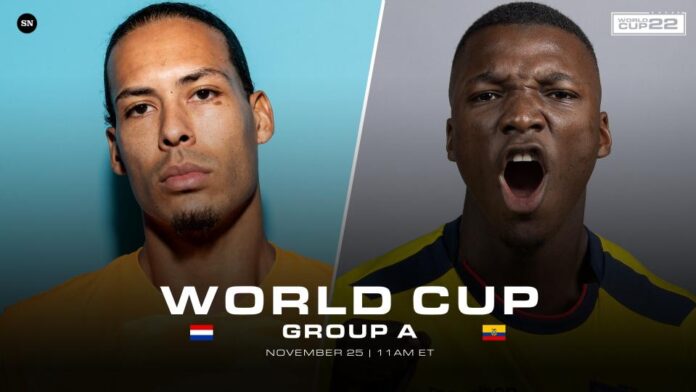 The stakes for the Group A match between co-leaders Netherlands and Ecuador could involve mathematical qualification to the Round of 16 for the winner, depending on what happens earlier in the day.

Qatar and Senegal will kick off earlier on Friday, and if that match ends in a draw, the winner of Netherlands vs Ecuador will be guaranteed a spot in the Round of 16.

Both teams are in this position after winning their group openers, each by a 2-0 scoreline. Two early Enner Valencia goals for Ecuador in the first half took down host nation Qatar. Meanwhile, the Netherlands left it late against Senegal. Cody Gakpo came through with six minutes remaining, and Davy Klaassen sealed it deep in stoppage time.

The conversation ahead of this match revolved around the health of the top goalscorer for each team. Memphis Depay can go 45 minutes, according to head coach Louis van Gaal, as he continues his road back to full fitness. Meanwhile, Ecuador confirmed there is no existing injury that would prevent captain Valencia from playing, after he hobbled off with a knee complaint at the weekend.

Sporting News is tracking live scoring updates and highlights for Netherlands vs. Ecuador at the 2022 World Cup. Follow below for complete results from the Group A match in Qatar.

MORE: How to bet Netherlands vs. Ecuador

3 hrs 15 mins from kickoff: Dutch boss Louis van Gaal really is one of a kind. An attendee at his news conference the other day told him of his admiration, so Van Gaal invited him to share a cuddle afterwards. The man really knows how to hug it out.

3 hrs 45 mins from kickoff: For the Netherlands, the chance to potentially secure a knockout-stage spot after only two games represents proof of their recent rejuvenation. Having failed to qualify for Russia 2018, Van Gaal has overseen a real change in fortunes for the Dutch in his third spell in charge. They face Ecuador on a mammoth 16-match unbeaten run. Can they extend that today? We’ll find out shortly.

4 hrs 45 mins from kickoff: The referee for today’s match hails from Algeria.

5 hrs from kickoff: Here’s how many minutes we can expect from Memphis Depay today.

Van Gaal: “Memphis Depay played 30 minutes, the next step is to play 45. His injury makes it difficult to determine when he can start, so we have to keep track of his recovery process.” pic.twitter.com/tYpl4kozP6

To start Memphis Depay or not? If Van Gaal is expecting the same intense, physical start to the match from their South American opponent that was shown in the opener against Qatar, it might be best to preserve Depay for the second half and let Vincent Janssen battle the Ecuadorean defenders until then.

Meanwhile, Andries Noppert should continue to start in goal after the shutout against Senegal.

According to Ecuador beat reporter Jocelyn Vera, La Tri will be lining up in a 3-4-3 formation to match the Netherlands lineup.

It’s a battle for the top spot in Group A at the Khalifa International Stadium as the joint leaders go head-to-head. The team that finishes in first place will avoid a potential Round of 16 matchup against the winner of Group B, currently led by England.

Ecuador left the best impression in the opening round against hosts Qatar, but the Dutch showed grit and poise in holding off Senegal and pouncing late to win their opener.

An upset result here by the unfancied No. 44-ranked South American side is not entirely out of the question. Here’s how you can watch all the action in the major global territories.

‘I got lip filler as surprise – now my husband and...

People Are Dislocating Their Thumbs Because A Meme Showed Them How