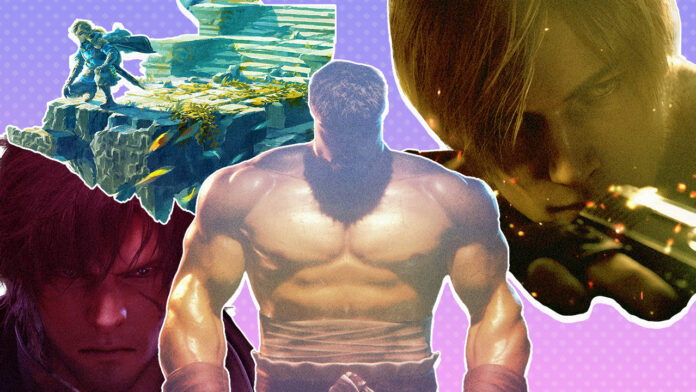 2023 promises a stacked video game lineup, ranging from high-powered, cutting-edge PC games to infinitely fun and portable Nintendo Switch games. Capcom’s Resident Evil 4 remake and Square Enix’s Final Fantasy XVI are big titles with locked-in releases dates, but there are many other titles with only a tentative 2023 release, including Armored Core VI: Fires of Rubicon, Black Myth: Wukong, and Final Fantasy VII Rebirth. Regardless, there are plenty of good games set to drop this year.

If you’re eager to learn about the best upcoming video games, check out the calendar below to see what 2023 has in store. We’ll continually update it as new games and release dates are announced. In addition, check out our games of the month list for a deeper dive into the hottest titles that are coming down the pike.

One Piece Odyssey(Opens in a new window)

Persona 4 Golden(Opens in a new window)

Persona 3 Portable(Opens in a new window)

Unravel the mysteries of the Dark Hour as a group of high school teens. Persona 3’s simulation elements paved the way for the highly successful RPGs that succeeded it.

Take up arms, summon legendary heroes, and lead your troops to victory in this latest installment of the beloved, tactical-RPG series.

Forspoken(Opens in a new window)

New Yorker Frey falls into the fantasy realm of Athia, and must master magic and supernatural parkour to vanquish dragons, defeat despots, and explore the open world.

Dead Space(Opens in a new window)

Relive the terror as repairman-turned-hero Isaac Clark, who must vanquish the mutant horrors onboard a derelict mining spaceship.

Deliver Us Mars(Opens in a new window)

A distress signal on a Martian colony kickstarts this thrilling puzzle adventure. Explore harsh terrain and mysterious ruins, recover lost colony ships, and unravel the mystery of the call that brought you to the red planet.

Clash: Artifacts of Chaos(Opens in a new window)

Put up your dukes and protect a magical creature in this third-person martial arts game set in the Zeno Clash universe.

Hogwarts Legacy(Opens in a new window)

Relive the Harry Potter magic as a student in the Hogwarts School of Witchcraft and Wizardry. Learn and use spells, explore iconic locations, and discover the mystery behind your ability to use forgotten magic.

Wanted: Dead(Opens in a new window)

Lay waste to crooks with gunfire and swordplay in this unique, third-person shooter from the makers of Dead or Alive and Ninja Gaiden.

Blanc(Opens in a new window)

Play as a wolf cub and fawn who are separated from their families and working together to find a way home in this visually dazzling, cooperative puzzle game.

Wild Hearts(Opens in a new window)

Tales of Symphonia Remastered(Opens in a new window)

The beloved GameCube action-RPG gets a visual remaster that cleans up the graphics to deliver the sharpest version of the game to date.

Atomic Heart(Opens in a new window)

This stylized dystopia is packed with mutated men and mechanized abominations to battle with melee and ranged weapons.

Play as not-Kiryu in this Yakuza spin-off set in 1800s Japan. Beat up (and cut down) thugs, engage in mischief, and enjoy the beloved series’ antics.

Atelier Ryza 3: Alchemist of the End & The Secret Key(Opens in a new window)

Young alchemist Ryza sets out once more to save her island and friends. Enjoy dynamic, turn-based combat, rich item crafting systems, and an expansive world to explore.

Team up with Kirby, Meta Knight, and King Dedede as you set out to retrieve scattered pieces of a crashed spaceship. Enjoy cute, side-scrolling action and four-player, cooperative multiplayer.

The Day Before(Opens in a new window)

This post-apocalyptic MMO drops you in an America overrun by diseased cannibals. You must navigate the ruined cityscape to scavenge weapons and materials to survive.

The Last of Us Part I(Opens in a new window)

Relive Joel and Ellie’s first PlayStation adventure, this time on PC. In the Last of Us Part 1, a fungal mutation has transformed mankind into poisonous cannibals. Shoot and fight your way through threats to deliver your cargo.

Wo Long: Fallen Dynasty(Opens in a new window)

Team Ninja takes its action pedigree to China and tells a fantasy-fueled story of the Three Kingdoms. Nioh’s frantic melee action has been refined to include new weapons, wizardry, and even aerial abilities.

Fatal Frame: Mask of the Lunar Eclipse(Opens in a new window)

This survival-horror game drops you into an abandoned sanatorium on the Japanese island of Rougetsu, where the restless dead haunt the night. Use your magical camera to keep the ghosts at bay as you explore and solve puzzles.

Bayonetta Origins: Cereza and the Lost Demon(Opens in a new window)

Pick up your laser sword, and set out on another adventure in the wake of the Jedi purge. New stances and lightsaber fighting styles aid in your fight against the empire.

Sifu(Opens in a new window)

System Shock(Opens in a new window)

Machines have run amok thanks to mankind’s greed. You must escape the Citadel Station while destroying the corrupted artificial intelligence: SHODAN.

GrimGrimoire OnceMore(Opens in a new window)

The studio behind Dragon’s Crown is set to re-release a beloved, real-time strategy game, but with remastered visuals, upgraded resolution, and an altered screen ratio. Skill and unit rebalances round out the package.

Meet Your Maker(Opens in a new window)

Meet Your Maker is a first-person building and raiding game that tasks you with creating mazes and traps to protect your resources (and raid other players for theirs).

This unique spin on Mega Man sees you take part in grid-based, RPG-like battles. The release is split into two volumes, with Vol. 1 including games 1-3, and Vol. 2 including games 4-6.

God of Rock(Opens in a new window)

God of Rock shakes up the rhythm game formula by blending fighting game mechanics with rhythm-based inputs for intense and dynamic battles.

Dead Island 2 is upon us after a 10-year wait, and it’s set to unleash more gory and highly creative zombie-smashing action. This entry takes place in open-world environments based on Los Angeles and San Francisco.

The Legend of Zelda: Tears of the Kingdom(Opens in a new window)

Return to Hyrule and vanquish the evil king Ganondorf in this open-world action game. Tears of the Kingdom introduces new traversal mechanics and radically enhances verticality by adding aerial architecture and structures to explore.

Suicide Squad: Kill the Justice League(Opens in a new window)

Rocksteady Studios takes us back to the DC universe, but this time through the eyes of classic, comic book criminals. Play as the Suicide Squad, rescue the Justice League, and stop the alien invader Brainiac.

Street Fighter is back with a vengeance. The latest game introduces new characters, greatly improved defensive abilities, and numerous optional game modes that are sure to please casual and hardcore fans alike.

Diablo IV(Opens in a new window)

The legendary hack-and-slash game returns with new character classes, improved visuals, and new mechanics to master as you slay demons and collect loot.

The latest installment in the iconic RPG series delivers dazzling single-player action set against a backdrop of fantastic political intrigue and supernatural mystery.

Return to the Dungeons & Dragons universe, and enjoy a lengthy campaign across the realm of Faerûn that uses similar combat as the Divinity games.

Games Without Specific Release Dates in 2023

Once again, our titular writer descends into the world of survival-horror, where an unseen darkness threatens his every move.

This spin on the Alien franchise has you in the commander’s seat as you direct Colonial Marines through harrowing, alien-packed environments in strategic, tactical combat.

Ark 2(Opens in a new window)

In this sequel, you stroll through Ark’s primal wilds and battle mechanized and prehistoric threats.

Armored Core VI: Fires of Rubicon(Opens in a new window)

FromSoftware takes a break from the Souls series to deliver a new entry in its beloved mech-based combat series.

Take up the assassin’s mantle once more, and eliminate the leaders of the templar order within Baghdad.

Avatar: Frontiers of Pandora(Opens in a new window)

Play as a Na’vi, an indigenous race on the planet Pandora, and fight back against the human RDA forces that have come to exploit the world.

In Banishers, you play as a pair of ghost hunters who must fight supernatural forces while contending with their own mortality. Banishers is a choice-driven RPG that features action-adventure elements.

Play as the monkey king, Sun Wukong, and enjoy creative combat in this stylized reimagining of his adventures, as described in Journey to the West.

Navigate the foul depths of an eldritch-inspired labyrinth with a party of emotionally scarred warriors in this rich dungeon-crawling RPG. Revel in sweet victory or despair when things go to pot and your party slowly loses its collective mind.

Exoprimal(Opens in a new window)

Blast dinosaur hordes in this cooperative, third-person shooter. Play in teams and defeat waves of scaley monsters, and compete against other squads by invading their games and menacing them mid-wave.

This action RPG, set in the Granblue Fantasy universe, takes some of the series’ classic characters and drops them into a new, combat-packed adventure.

The Lords of the Fallen(Opens in a new window)

Embark on a vast new action-RPG adventure in the Lords of the Fallen universe, and take down the demon god Adyr.

Pikmin 4(Opens in a new window)

Pluck the titular Pikmin out of the earth to assist you in all manner of tasks, from fighting to lifting, in this charming real-time strategy game.

Pragmata(Opens in a new window)

This action-adventure title depicts a dystopian future on the moon and features excellent graphics courtesy of Capcom’s RE Engine.

Redfall(Opens in a new window)

Starfield(Opens in a new window)

The classic Suikoden JRPGs finally escape the PS1 era’s confines, so you can play them on contemporary consoles and PCs.

Enjoy more competitive puzzle action as you lay bombs across a grid to clear space, reveal power-ups, and blast your opponents to smithereens.

Lies of P(Opens in a new window)

Follow Pinocchio on a gothic fantasy, and enjoy Bloodborne-inspired action as you defeat automatons in a journey to become human.

The Wolf Among Us 2(Opens in a new window)

The episodic graphic adventure picks up where the last game left off, following the misadventures of Bigby Wolf.

Stellar Blade(Opens in a new window)

Play as a hulking space marine and take down the Tyranid threat with brutal third-person shooting and melee fighting.

World’s scariest clowns – and the reason why people are terrified...