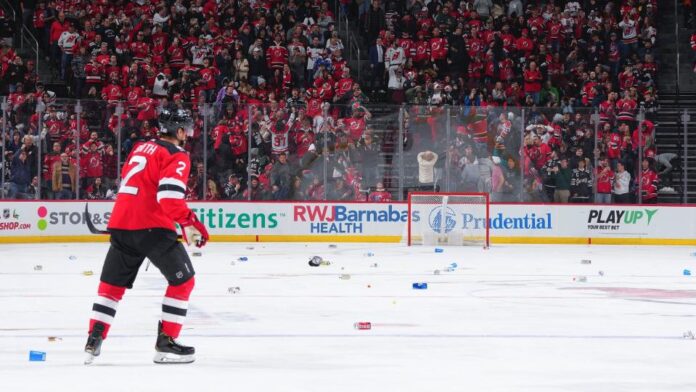 Despite being the home team, it seemed New Jersey couldn’t get a call to save its life. Officials waved off not one, not two, but three goals, disallowed scores that proved paramount as the Devs fell 2-1 to Toronto.

The first two goals were ruled out after Devils skaters were adjudged to have interfered with Maple Leafs goaltender Matt Murray. They were waved off fairly quickly and drew the usual chorus of boos one would expect from the home faithful.

The third goal was ruled out after officials determined that New Jersey forward Erik Haula kicked the puck into the net.

The @NJDevils have had THREE goals called off tonight. 😳 pic.twitter.com/Vvabm6RPLi

All hell broke loose as the call of that disallowed goal call rang through the arena. Fans grabbed everything — from plastic bottles and cardboard to beer cans — and let it rain on the Prudential Center ice surface.

The Devils fans are NOT happy after the disallowed goal 👀

The Maple Leafs have headed to the locker room after fans littered the ice with items pic.twitter.com/MQXPxKx4X5

Talk about making your presence felt.

The Leafs opted to head to the locker room, hoping to avoid the debris that was coming down. They eventually returned to the ice and then held off a late New Jersey rally despite Dougie Hamilton’s third-period goal.

“It’s definitely frustrating, but nothing we can do because the refs make the call and there’s nothing that’s going to change it, so we’ve got to stick with it,” said Devils captain Nico Hischier (via NHL.com). “I think we did a good job but came up short.”

The Devils’ social media team had fun with the team’s misfortune, tweeting through the pain.

Man Tries To Propose In Times Square But Drops Ring Down...