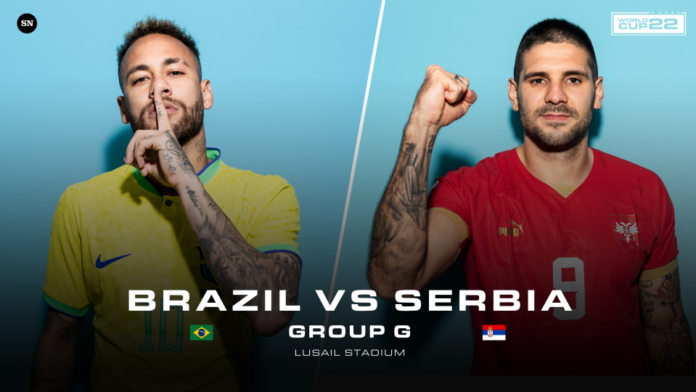 Five-time World Cup winners Brazil will hope to extend their run of 15 unbeaten group matches as they take on Serbia in their Group G opener at Qatar’s Lusail Stadium.

Tite’s men have only lost three games since Belgium knocked them out of the 2018 World Cup quarterfinals, their most recent defeat coming all the way back in July 2021 in the Copa America final.

Tite is the first coach since Tele Santana in the 1980s to lead the Selecao into successive World Cups, and he has selected an attack-focused squad as he seeks to guide his country to a first World Cup title since 2002.

Serbia have never been beyond the group stage in their three World Cup finals appearances, and they are expected to battle it out with Switzerland and Cameroon for second place in Group G, assuming Brazil emerge as group winners.

The Sporting News is tracking live scoring updates and highlights for Brazil vs Serbia at the 2022 World Cup. Follow below for complete results from the Group G match in Qatar.

2 hrs from kickoff: Another of Serbia’s national sides have a message for tonight’s underdogs.

3 hrs from kickoff: Some more numbers to illustrate the task facing Serbia and Brazil’s other group opponents…

Brazil are unbeaten in their last 15 World Cup group games, winning 12 of those matches and drawing three of them.

Their last defeat in the group phase was in 1998 against Norway, and they have topped their group in round one in every single World Cup since 1982, last failed to progress past this point in 1966.

Their manager, Tite, will become the first coach to lead Brazil at back-to-back FIFA World Cups since Tele Santana in 1982 and 1986.

4.5 hrs from kickoff: Serbia are unbeaten in six matches since their 1-0 defeat at home to Norway on June 2, winning five times during that run.

They’ve won their last three games and scored 11 times along the way, thrashing Sweden 4-1 at home and gaining revenge with a 2-0 win in Norway in the UEFA Nations League before a 5-1 hammering of Bahrain six days ago.

5 hrs from kickoff: Hello, and welcome to The Sporting News’ live coverage of the Group G clash between Brazil and Serbia. The favourites for the title finally get their challenge underway, and there is a lot of expectation on the Selecao. Let’s get started!

Photographs from a Brazil training session leaked by Marca suggested Vinicius Junior is primed for a starting berth against Serbia, who topped a qualifying group featuring Cristiano Ronaldo’s Portugal.

Raphinha is set to line up on the opposite flank, while it’s been reported that Manchester United midfielder Fred will be left on the bench.

Serbia’s star forwards Aleksandar Mitrovic and Dusan Vlahovic suffered injuries earlier this season but have both returned to fitness. However, Juventus’ Filip Kostic is a doubt with unspecified muscular problems.

Watch the match on fuboTV in USA

World Cup injuries 2022 tracker: List of players injured at Qatar finals as Neymar and Kane battle to be fit

France vs Poland live: World Cup score, highlights, result from 2022 Round of 16 match

Volcanic Activity on the Moon? It’s More Recent than You Think

This Brush Lets You ‘Lick’ Your Cat