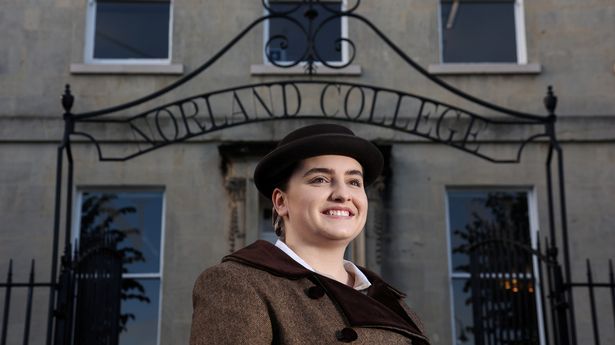 A student preparing to become a ‘real-life Mary Poppins’ has shared what it’s like to study at the world’s most prestigious nanny school that’s favoured by the Royal Family – and even used by Kate Middleton. Matilda Norton, 23, started studying at Norland College in September 2020, and is now in her third year of training, taking lessons in self-defence and sewing.

When she’s finished, Matilda and will go on to look after the children of some of the richest people in the world – including celebrities and royalty – even Prince George has a Norland Nanny, Maria Borrallo.

Now Matilda has revealed what it’s like to go through the rigorous training – which includes over 1,200 hours of hands-on placements.

Mum hits back after parents troll her for her son’s epic £3,000 Bluey party
Even the Royal Family swear by Norland Nannies
(

What do you think about the prestigious school? Let us know in the comments…

Matilda said that students at the school must learn all sorts of extra skills including self-defence, advanced driving techniques and cyber security training from former military intelligence officers – all designed to help them keep their little charges safe.

Matilda, from near Worcester, who has 18 months left of her training, said: “We have such a diverse amount of training.

“It ranges from learning how to make baby a bath and formulas, to child drama and then the crazy stuff like skid pan training and self-defence.

“Being a part of the Norland brand does entail a lot more than a normal university. You have a lot more responsibilities for how you project yourself to the world.

“Everything you do has a repercussion for Norland, and it’s gone 130 years with a phenomenal reputation, so I feel privileged to do that.

“We’ve been taught by some of the best in the world, the education you get is second to none.

“You feel like you step out and there’s not much, if anything, that a family could throw at you that you couldn’t handle.

“Norland Nannies are so in demand, even now when jobs are so hard to get, there’s multiple places per student.

“You get to be part of something bigger, which I really love.”

Norland students carry out around half of their studies on placement, which begin as early as six weeks into their first year, amounting to over 1,200 hours.

They get a BA (Hons) degree in Early Childhood Education and Care, alongside a prestigious Norland diploma which teaches all the practical skills it takes to become a Norland Nanny.

Even Mary Poppins would have struggled at the school
(

Students pay an annual tuition of £15,740 for their training, which covers the costs of studying for the two distinct award-winning qualifications.

After three years of studying, Matilda will go on to her Newly Qualified Nanny (NQN) year in paid employment, to ensure she’s up to Norland’s high standards – after which she will officially become a Norland Nanny.

Once fully qualified, Norland Nannies will earn an average of £40,000 in their first years, and salaries rise up to £100,000 for nannies with experience, depending on their role and location.

Six-figure salaries are not uncommon for overseas roles, and Norlanders have their pick of jobs – with 10 jobs for every Norland Nanny seeking one.

Matilda added: “We split the course so we have two days for the Norland diploma, and two days where it’s for the degree.

“The degree is very science based, like we have brain development lectures where we can see how children’s brains are working.

Matilda has to take classes in self-defence
(

“We learn about how raising children has changed throughout the years with evolution of pedagogical approaches and supporting theories, and how it is a far cry from the traditions we saw in the past.

“Combining all this has made me realise it truly does take a village to raise a child.

“Then our diploma is the practical side of things, like sewing and food nutrition.

“We cover amazing topics with guest lecturers coming in to talk about everything from neuroscience of child development, through to adopting anti-discriminatory practice and most recently creative emotionally supportive environments for children through emotion coaching.

“Then you have all your baby things where you learn about topping and tailing, baby formulas and how to make up a cot or pram. We even have self-defence lessons every year too.

There are classes in cyber security too
(

“Our placements range from between eight to 12 hours a day, depending what placement you’re doing, so quite a hefty chunk of time.

“Then for lectures it’s 9:30am to 3:30pm most days, so contact hours wise, it’s way more than any other university.

“I didn’t really know how much work went into the background of childcare. You see what goes on in schools and nurseries, but there’s so much research that goes into making sure your children have the best support and the best start in life.

“I think what people find with a Norland Nanny is that we can go to a family and find our feet at a ridiculous amount of speed.

“We can step into your family schedule effortlessly, and a lot of feedback from parents that have has a Norland student versus another training nanny is that everything’s a lot smoother with us.

“Because I think we just know what to look for and what the cues are – we have it down to a fine art.”

Matilda, who is the deputy head of students, came to the higher education college after dropping out of an Environmental Geophysics degree at the University of East Anglia.

She was working part-time as a nanny alongside her studies, and decided she wanted to pursue the profession more seriously as she ‘found it more fulfilling’.

She dropped out of her original degree in early 2020, and applied to Norland.

She said: “I knew I wanted something with a degree and had a good turnaround for employment afterwards.

“Norland kept coming up but I thought there’s no way you can apply, it’s above and beyond and I have to be realistic about my expectations.

She could end up working for the Royal Family
(

“But in the end I went for it, I opened a new UCAS account, wrote my application and got offered an interview within a week.

“Up until then I had kept it a secret from everyone, but I invited my parents over for Sunday lunch and just told them I was dropping out, but I had a plan in place.

“Ironically my mum had always mentioned Norland in passing, so she was over the moon, she was just like ‘oh my gosh, I can’t believe my daughter’s going to be training to be a Norland Nanny.'”

Matilda attended her interview in Bath in March 2020, where she was put through group interviews, presentations and finally, an individual interview.

She could be Prince George’s next nanny
(

She said: “It was a bit intimidating. At that point I think I had a bit of imposter syndrome.

“Some of the other candidates had been angling for a place at Norland their entire lives, they’d known since the age of 12 that they wanted to be a Norland Nanny, and I had just come in at a later stage.

“But it was really fun to hear everyone’s perspectives. At the start we were told that Norland had a space for every single one of us, they just needed to know that we were passionate and had a commitment to working with children.”

Sadly, Matilda’s first year at Norland was amidst the pandemic, but she said it did not disrupt her studies as badly as some of her friends at ‘normal’ universities.

Despite her ‘different route,’ going into Norland, Matilda has never looked back.

She hopes to take her experience and education to a home in the countryside next year for her final placement, with at least three children to look after.

She said: “We put a lot of weight on academic these days, but I’m really glad I made the change. I love every day, I’ve never been happier.

“It can be daunting for anyone going to apply, but Norland are so supportive and helpful the whole way through.

“I’d say to anyone considering it to just go for it.”

Charles Bronson ‘has changed and should be freed’ at public parole hearing, claims pal