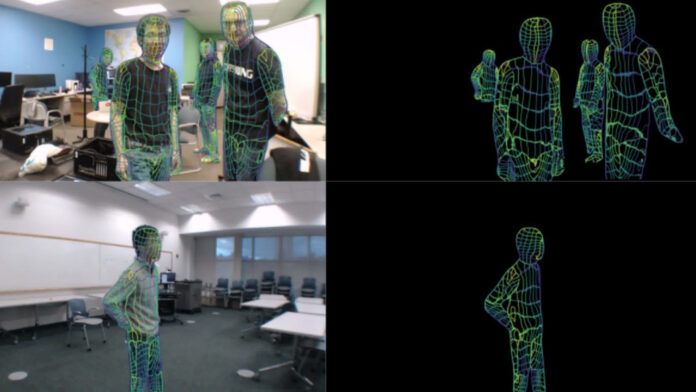 It turns out you can use Wi-Fi signals to detect the position and body postures of people inside a room, according to new research.

The findings(Opens in a new window) come from a group of scientists at Carnegie Mellon University, who explored whether changes in Wi-Fi signals can be used to estimate a person’s body position. The effort led the researchers to develop an AI-powered program that can map a person’s body parts by interpreting the Wi-Fi signals in a room.

The researchers say their approach involved using two off-the-shelf internet routers, which only cost around $30 each, to measure the Wi-Fi signals from opposing ends of a room.

The group then borrowed an existing(Opens in a new window) AI model that can estimate body poses from images, but applied it to 2D “feature maps” built from the recorded Wi-Fi signals.

The researchers’ paper includes the results, and they show the system can detect someone’s body posture to varying degrees of accuracy.

Still, the findings may seem creepy, since it’s potentially a way to spy on people and what they’re doing inside their homes. But ironically, the researchers say using Wi-Fi signals could act as a low-cost “privacy-preserving” way to conduct surveillance because it eliminates capturing identifiable images. Instead, their Wi-Fi system can only estimate the outlines of a person.

“These (privacy) issues are particularly critical in healthcare applications, that are increasingly shifting from clinics to homes, where people are being monitored with the help of cameras and other sensors,” the researchers wrote, later adding: “This technology may be scaled to monitor the well-being of elder people or just identify suspicious behaviors at home.”

In addition, their approach could be a cheaper alternative to RGB cameras or using LIDAR sensors to track and detect body postures within a room. However, using Wi-Fi to detect body postures can still face limitations. For example, Wi-Fi signals can significantly change depending on the environment. “Therefore, it is still a very challenging problem to deploy our model on data from an untrained layout,” the researchers wrote.

The other problem is that the AI program they used to map out the body postures is “biased” and will likely produce the wrong result if the person is making an unusual pose. When the environment contains three or more subjects, it’s also harder for the program to determine the body poses for each individual. Nevertheless, the scientists believe they could resolve at least some of these challenges by training their AI algorithms on more extensive data.

Royal Wedding 2018: The Queen Doesn’t Join In With The National...