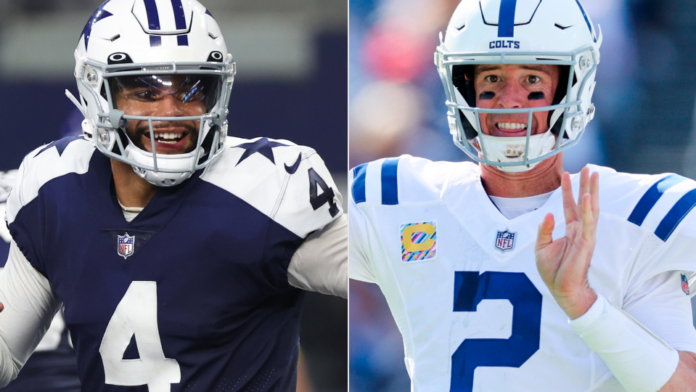 One of these things is not like the other.

The Cowboys are a bona-fide playoff contender, sitting behind just the Eagles in the NFC East, and with their top-tier defense, they could even make a case for championship contender.

That’s… a lot more than can be said about the Colts.

While Indianapolis has shown a bit more fight under interim coach Jeff Saturday than they did under Frank Reich, no one is confusing the Colts for playoff contenders this year, even in a fairly non-competitive AFC South. Indianapolis’ offensive line, one of the worst in football, is going to have its hands full with the elite pass rush of Dallas.

But, “any given Sunday” is a thing for a reason — and Mike McCarthy is still the Cowboys head coach.

Here’s how to watch the “SNF” matchup between the ‘Boys and Colts:

What channel is Cowboys vs. Colts on today?

For those to choose to live stream “SNF,” fuboTV carries NBC and offers a free trial. FuboTV also carries ESPN, CBS, Fox and NFL Network, meaning that most local games will be accessible via the streaming service.

For viewers in Canada, Packers vs. Eagles can be streamed via DAZN, which carries every NFL game.

What time is Cowboys vs. Colts today?

As is customary for “Sunday Night Football,”  Cowboys vs. Colts will kick off at 8:20 p.m. ET.

The Colts travel to Jerry World, AT&T Stadium in Dallas, to take on the ‘Boys.

Cowboys vs. Colts will be broadcast on NBC. That means those with a cable subscription will be able to stream the event free on NBCSports.com. Those without cable can stream via Peacock with a subscription.

Cord-cutters can also stream “Sunday Night Football” with fuboTV, which carries NBC and offers a free trial. FuboTV also carries CBS, Fox, NFL Network and the ESPN family of networks, so users will be able to watch most locally broadcast NFL games.

Other streaming options for Cowboys vs. Colts are as follows:

NBC is the broadcast home of “Sunday Night Football” for the 16th consecutive season. This year, the broadcast team will be Mike Tirico on play-by-play, Cris Collinsworth providing color commentary, and Melissa Stark reporting from the sideline.

“Sunday Night Football” games can be streamed on NBCSports.com, the NBC Sports app, Peacock or on fuboTV, which offers a free trial.

Mum mortified after faceplanting and flashing crowd during race at child’s...

‘I banned my mother-in-law from our home after she installed hidden...