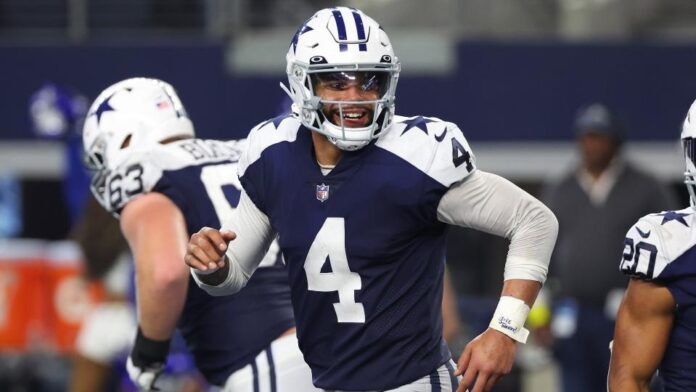 How many tight ends can fit in an AT&T Stadium Salvation Army kettle? Apparently, three of the four on the Cowboys’ roster.

In the fourth quarter of the team’s Thanksgiving game vs. the Giants, tight end Peyton Hendershot scored a touchdown on a 2-yard jet sweep. To celebrate, Jake Ferguson, Sean McKeon and Dalton Schultz all hopped in the giant red Salvation Army kettle in back of the end zone and played a human-size game of whack-a-mole.

It ended with Hendershot whacking Ferguson on the head with the football.

Stay for the @SalvationArmyUS whack-a-mole!

The only thing that featured more tight ends than that kettle was the Cowboys’ offense. Along with Hendershot’s rushing touchdown, Ferguson and Schultz were heavily involved in the passing attack. Schultz caught four passes, including two touchdowns, for 31 yards. Ferguson had three catches for 57 yards and featured one of the most impressive plays of the game with this hurdle.

JAKE FERGUSON IS AN ATHLETE.

That Salvation Army kettle has become a staple of Cowboys celebrations. It started with running back Ezekiel Elliott jumping into it after a rushing touchdown in December 2016 against the Saints.

10/10 on the Ezekiel Elliott celebration. He ran into the salvation army kettle. #DallasCowboys pic.twitter.com/h7S9KNbIHD

Elliott was back at it in 2018. He started by dropping $21 into the kettle after scoring a rushing touchdown.

He’s eating early!@EzekielElliott scores and then makes a donation to the Salvation Army. #WASvsDAL pic.twitter.com/LKaOcdy11X

He then dropped his quarterback into the kettle after Dak Prescott scrambled for a 5-yard touchdown.

Safe to say, that Salvation Army kettle has become an AT&T Stadium fixture around the holiday season.

Contortion On A Stand-up Paddleboard With Tori Kubick

Green ‘Fireball’ Flashes Across The Sky And Stuns Onlookers In Australia

The Cursed Rocks And Guilty Tourists Of Uluru