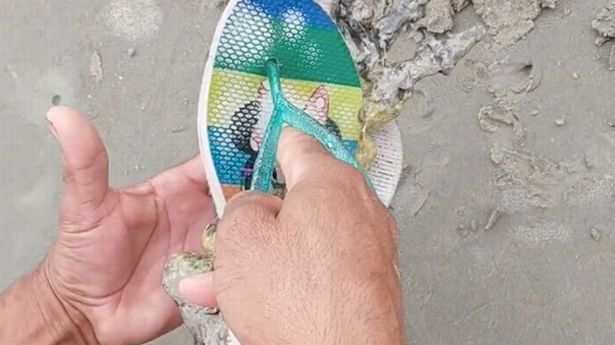 They compared the size of the hand to a flip flop (

A huge skeletal hand has been found on a beach – and the couple who discovered it are fearful it could belong to an alien.

Leticia Gomes Santiago, and her boyfriend Devanir Souza, were strolling along the shoreline when they stumbled upon the strange sight on the sands in Ilha Comprida, São Paulo State, Brazil, on 20 November.

The pair were horrified at their discovery, and shocked Leticia said: “We think it is not human because of the size and amount of bones. What could it possibly be?”

The couple then filmed the eerie hand with long boney fingers next to Leticia’s flip flop to show how big it was in comparison to a human hand.

…and they thought it may have belonged to an alien!
(

She added: “It’s very big. We don’t know what animal it is, and if it’s an alien, even worse.”

Another said it may be a ‘Mermaid hand’.

“Might as well be a Dinosaur bone!”, someone wrote.

One said: “Take it to a biologist, because this isn’t normal.”

Marine biologist Eric Comin stated that the unusual ‘hand’ belonged to a cetacean, which is an aquatic mammal that includes whales, dolphins, and porpoises.

But he admitted further tests would be needed to determine exactly which one.

Based on the images and state of decomposition, the biologist said it was likely the cetacean died at sea around 18 months ago.

Due to its size, Comin said the bones probably belonged to a dolphin, especially as they are commonly found in the region.

The biologist added that anyone who finds animal remains on the beach should notify the region’s environmental agency, the Cananéia Research Institute (IPEC).

IPEC spokesperson Henrique Chupill, who also said that the skeleton probably belongs to a cetacean, stated: “We always prioritise leaving the bones on the beach so it does not interfere with the cycling of nutrients within the ecosystem.

What would you think if you found this? Let us know in the comments.