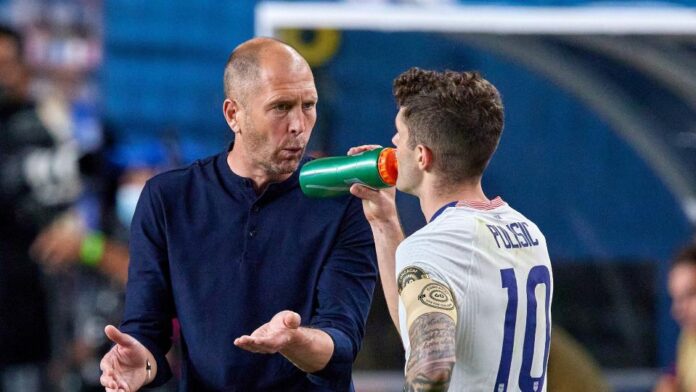 The expectations are clear for Gregg Berhalter and the United States at the 2022 FIFA World Cup: anything less than knockout stage qualification is a failure.

Fans will see group stage elimination as beneath the USMNT, and failure to qualify for the knockout round, even when handed one of the most difficult group draws in the entire World Cup field, is not an acceptable option.

With the United States set to co-host the 2026 World Cup, and one of the tournament’s youngest rosters in 2022, there’s a sense of building for the tournament four years from now. Yet performance in this year’s FIFA showcase is also expected, and Berhalter will be well aware of the expectations.

MORE: USMNT settles for draw with Wales in World Cup Group B opener

What does the USMNT need to qualify for the World Cup knockouts?

With two games still to go, there’s lots still to be decided for us to have a clearer picture of what the United States needs moving forward after emerging from the opener against Wales with one point.

Mathematically speaking, six points is the target. Six points does not guarantee a team a spot in the knockout round, but it’s a clear threshold. No team in the history of the FIFA World Cup has ever been eliminated from a group stage with six points.

Theoretically, it’s possible for three teams to finish on six points and therefore leave one team on the outside looking in with tiebreakers, but it almost never happens. It has happened in the World Cup — in 1994, Nigeria, Bulgaria, and Argentina all finished with six points, with Greece on zero, but in that tournament, the highest third-place finishers reached the knockout stage as well, so Argentina were safe. Famously, at the 2001 FIFA Confederations Cup, South Korea were eliminated in a three-team, six-point mash-up behind France and Australia, but that’s an extreme rarity.

Five points still does the trick. No team in World Cup history has been left out of the knockout stage with a five-point haul from a four-team group in the modern format. In 1978, Brazil finished second in their second-round group with five points, but in that year, second-place finishers advanced to a playoff, so they moved on to the third-place match.

Three points is a near-impossibility. To advance from the group stage with just three points, it requires one team to dominate the group and steal all the other possible points. Mathematically, it’s tough to envision a scenario where this works out a path towards qualification, as it requires either three points via draws, or three points plus a tiebreaker advantage over one of the teams that defeated the country in question.

Three points has not been enough to qualify for the World Cup knockout stage since Chile did so in the 1998 World Cup, using three draws to skate past Austria and Cameroon, while Italy dominated the group.

Odds for USA to qualify for World Cup knockout stage

The United States will be targeting a goal of reaching the knockout stage at the 2022 FIFA World Cup. Anything less will be considered a disappointment and could have long-term ramifications for the coaching staff and players.

The United States, however, are in a tough battle to escape Group B that includes England, Wales, and Iran. By the odds, the U.S. and Wales are almost thought to be a coin flip when it comes to who will qualify for the knockout stages behind heavy favorite England.

The opening draw between the U.S. and Wales only increased the pressure on both to take care of business against Iran and try to earn some sort of result against England.

World Cup odds for Group B after Round 1 of matches

In the FIFA World Cup group stage, goal difference is the chief tiebreaker between teams level on points. After that, goals scored comes into play.

If neither of those can separate teams, they move to head-to-head results, goal difference, and goals scored.

The latter two (head-to-head goal difference and goals scored) only come into play if there are more than two teams level, as if two teams drew their match, they would also by nature be even on goal difference (zero) and goals scored (the same). If there is still nothing to separate the teams, they go to fair play points, and then the last resort of a drawing of lots.

Fair play points are a simple point system used to calculate a team’s ability to play in a safe and sporting manner. Points are given for being shown a variety of cards, meaning the team with the fewest fair play points comes out ahead.

It should be noted, a player can only achieve one of the point values below in a given match. For example, a player who earns two yellow cards and is therefore sent off would gain just three points for achieving a second yellow card, not four points for the two different cards earned.

Note: Some outlets use negative points for cards, which can get confusing, so here we show points as gained for various cards shown.

Straw Getting Passed Through Bottle Illusion Is Blowing People’s Minds

Locked Up By Love? The Dating Game’s (Serial) Killer Appearance